It’s incredible that humans have such intimate power over both life and death. It requires a sense of touch to achieve both: having sex to create life, and throttling with the hands to end life. That’s intimacy. And that we can affect both so easily is insane.

We give such importance to life: it’s magic, it’s religious, it’s a phenomenon we know only to exist here, on our home planet, and we’re the top of the food chain. No, we’re outside the food chain. We have made our own food chains! We are the Masters of the planet that can make life. Yet, our lives don’t seem so big and important when you look at individual human lives on a non-human scale. Trees are the longest-living life form on the planet. The Llangernyw yew tree (pictured below) is estimated to be between 4000 and 5000 years old. The lifetime of a star is even longer. Our Sun has been shining for 4.6 billion years.  In the timeline of the cosmos, a human lifetime is basically nothing. To say a “blink” would be a gross overstatement. With this perspective, it seems to make murder via throttling easier to think about, since we have shed our emotional bias.

From the Earth’s 4.5 billion year old perspective, the death of a human is simply the returning of nutrients and matter of one human body back to nature, while also removing one dependent. From our human perspective, murder via throttling with the hands is heavy on the heart and mind. I think any person with at least a grain of compassion and empathy would feel bad doing such a thing. Why? Because they would hate to be in that person’s position. This is the power of empathy. I don’t want to throttled, therefore this other person probably doesn’t want to either. Yet it is within our feeble physical power to bring about this permanent change, this teleportation from the world of the living to the Other Place, where we will all someday go, but no one knows the location, conditions, or whether those words even mean anything. What power we have, over the small things that we are! I think to be a human without empathy would be like permanently having the point of view of a tree, or the Sun.

Luckily, the large majority of us have the imaginative powers to deduce and “try on” the feelings of others. This ability to create for ourselves an approximation of what it is like to be someone else gives us some common moral insight. Those without these common morals are seen as troublemakers, deviants, dangerous, evil, undesirable. To the worst of these people, we do awful things, like caging or killing. It’s curious that to these less empathetic humans we match their level of empathy and do things we wouldn’t normally want to do. My opinion is that these less empathetic people should be prescribed massive doses of caring and empathy. We should give them our best human love, tenderness, and understanding, in hopes of teaching them how it is done.

If, after our very best exhaustive efforts, we are unable to persuade the deviant in question, we should try and get them to explain to us our own shortcomings. If there is something to be learned from this very inhuman human, we should learn it and carry it forward. Then, we explain as best as we can that this person is beyond our help. What would they want us to do? Presumably they would want to be free to act according to their own will in the world they were born into. Obviously this would not be permitted. I think the person in question should be asked to please kill themselves so that we can recycle their nutrients, so that from them, flowers can grow. If they refuse – which is understandable – and if there is nothing more we can do to help them, I think we give them two last intimate sensations. First, sex. Second, throttling via the hands.

I’ve been looking through old OZ magazine PDFs that I found archived on the University of Wollongong’s website. This nice four-piece panel on Norman Normal was a wonderful gem. I love the cut-and-paste feel of it. The line art in the background reminds me of the rings of an insane spiralling tree that has learned to travel through time in irregular ways, and its warped age is layered line by line behind Norman the Normal human. 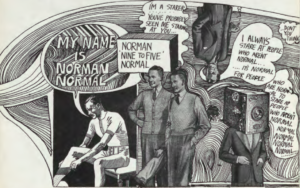 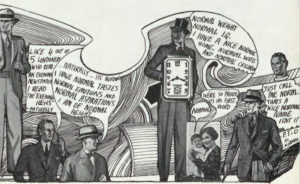 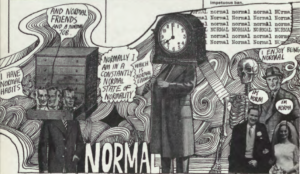 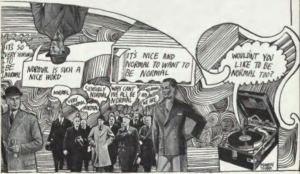 As I look at these pictures I remember not to become simply a synonym of everyone else. Humans are animals and we must realize that our existence is inherently senseless. So let’s accept our absurdity and leave one button unbuttoned. Store strange things in your kitchen drawers. Spend your energy being kind to everyone else, they need it so badly.

Here he states that the Christian moral doctrine provides people with intrinsic value, belief in God (which justifies the evil in the world) and a basis for objective knowledge. In this sense, in constructing a world where objective knowledge is possible, Christianity is an antidote against a primal form of nihilism, against the despair of meaninglessness. However, it is exactly the element of truthfulness in Christian doctrine that is its undoing: in its drive towards truth, Christianity eventually finds itself to be a construct, which leads to its own dissolution. It is therefore that Nietzsche states that we have outgrown Christianity “not because we lived too far from it, rather because we lived too close”